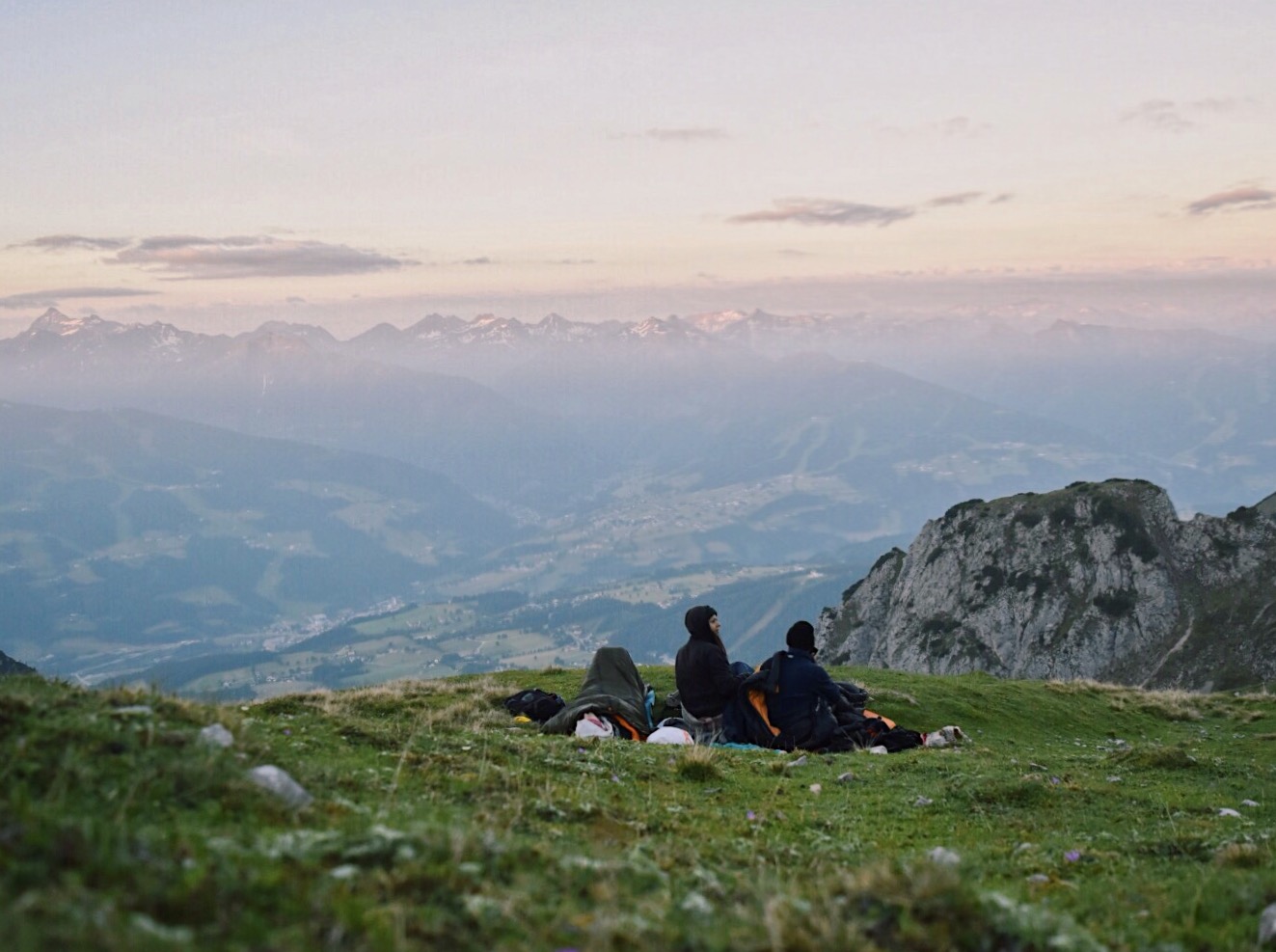 AFTER WORK HIKE AND SLEEPING UNDER THE STARS

I´m writing this from my comfortable couch, wrapped in a blanket and with a coffee next to me. All the things I wished I had last night.

I have to admit I was really bad at planning my vacation, that officially started today. I had to be on Hvar on Monday, and my plan was to leave a few days before. The second plan was to first go hiking around Croatia for 3 days, before leaving to Hvar. Then they mentioned at work that they might go hiking the local mountain and sleep outside hmmm … so I put that as my third option. But as the workday was coming to an end, I realized that the first plan will have to be postponed and the second canceled.  So I said Yes to the third one: 2,5h hike to Guttenberghaus above Ramsau and sleeping outside in a sleeping bag.

It´s summer in Schladming so the temperatures were around 28C in the town. I had 1h to eat and pack my stuff. I grabbed as much survival stuff and clothes as I could squeeze in my old backpack: a warm long sleeve, thermal sweater, hoodie, tights, warmer socks, beanie, sleeping mat and a sleeping bag. My sleeping bag said Comfort zone +9, pffff that should be enough. We grabbed some food and started hiking around 19:30. Destination Guttenberghaus. It was hot like hell on the beginning, but thankfully the sun got weaker and we were also getting closer to the top, so the hiking got a lot more enjoyable and the view was really amazing. I´m surprised I didn´t trip since I was looking at the view or viewfinder most of the way. We made it up in around 2h. We found our spot and grabbed our dinner. A private restaurant with the best view. The sky got darker, the stars got brighter, the air colder and we feel tired, happy and free. As I already put on all the clothes that I had, I slowly realized that it might be cold if the temperatures drop.

As I already put on all the clothes that I had, I slowly realized that it might be cold if the temperature drops a few degrees. And it did. I put Mali {the dog} in my sleeping bag so we kept each other warm. But she eventually left me and moved to a warmed bag, so I was a bit cold the rest of the night. The guys slept like babies in their -25C sleeping bags. just look at them …. Disclaimer: As far as I know, it´s generally allowed to sleep outside without a tent here, but it is forbidden in the Vienna and Tyrol as well as in the national parks. Respect the nature, keep quite, clean behind yourself and don´t make any fire. Please pick up also any other trash you find on the way up. I woke up around 4.30 because the sun was slowly coming out. I took Mali and hiked to the peak to catch some sun and a view. The rest of the crew slowly woke up and the hut opened their door, so we finally got our coffee. We stayed around the hut for a few hours, enjoyed the sun, found a dead sheep :/, bonded with the hut owner and dried our stuff in the sun. As the morning hikers started coming up, we decided it´s time to leave.

I came home totally tired, but feeling extremely happy we did all this in one night. What if I would just come home from work, watch some random videos and go to sleep. I would miss out on all of this … I always hate or just ignore when people say “I don´t have time or money to do that”, yes it might be true for some (working a few jobs to survive, having kids,….), but a lot of people just don´t take the time to do things, come up with excuses and complain later. I´m definitely guilty of that too. That´s why I wanna say Yes to even more adventures that come my way and hope you do the same. And hiking will not cost you anything. Pack some lunch at home, bring tea and use your legs 🙂

People often ask me, if I even have a job. Yes, I do. 40h/week office one 🙂 So even if you are working 40h/week you can still have adventures if you want to. If we would leave straight after waking up, we would easily make it to the office before 8:00 (like we did here). But since yesterday was a holiday, we took it easy.

You might not live next to the mountains, lake, beach or woods. But you can still grab/borrow/rent a bike or walk to the park. It´s up to you how you want to use your free time. Sometimes I just wanna sit inside and do some work for this blog and I love it as much as going out and getting lost in the woods, mountains, lakes.

And as soon as I find a better sleeping bag, so I can also sleep like a baby on 5C {or minus}, I will sleep on the mountain again. But right now I will pack my bikini, take off my shoes and sleep on my beach for y week. Thank you and just Say Yes next time you are invited to go hiking or doing anything else you would love to do more off,